The impoverished nation publicly acknowledged the virus had breached its borders for the first time in May, though it’s difficult to assess the real situation on the ground due to the opaque regime and its isolation from the world.
North Korea’s Emergency Epidemic Prevention Headquarters, which had been investigating the outbreak, said Friday it had started in the Ipho-ri area of Kumgang County, north of the Demilitarized Zone (DMZ) that separates the country from South Korea.
An 18-year-old soldier and a 5-year-old child in the area were identified as the first two positive cases of this outbreak, and began showing symptoms after coming into contact with “unusual items” on a hill near the border in early April, according to the investigation report, released by state-run news agency KCNA.
The report did not specify what the “unusual items” were — but stressed the need “to vigilantly deal with unusual items coming by wind and other climate phenomena and balloons” along North Korea’s southern border.
While it is possible for people to be infected through contact with contaminated surfaces or objects, the risk is generally considered to be low, according to the US Centers for Disease Control and Prevention.
In late April, a North Korean defectors’ activist group based in South Korea, Fighters for Free North Korea (FFNK), claimed it had sent large balloons carrying anti-North Korea leaflets across the border.
The group also said it sent balloons carrying medical supplies such as Tylenol and Vitamin C to the North in June during the country’s Covid-19 outbreak.
Both shipments were sent without the required approval from South Korean authorities.
In response to the North Korean report, the South Korean government denied the possibility of Covid-19 spreading through leaflets sent from the South, quoting local and international health experts on the low risk. 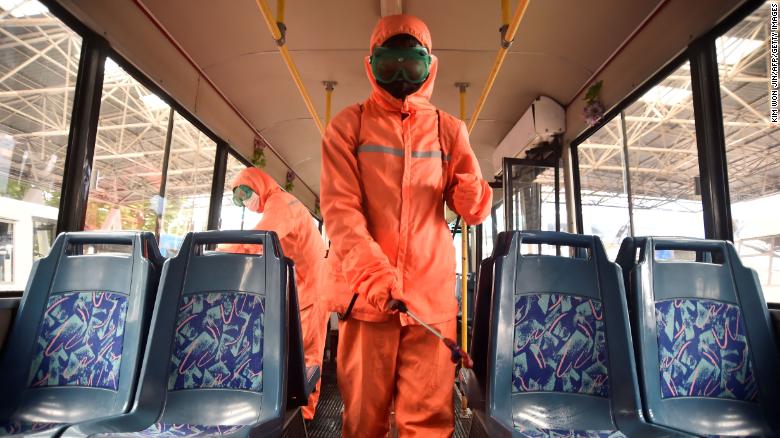 Health workers disinfect a trolley bus in Pyongyang, North Korea, on June 9.
The South Korean Unification Ministry’s deputy spokesman, Cha Deok-cheol, said in a briefing on Friday that the government had repeatedly asked the group to stop sending its balloons over the border, as the government is working on inter-Korean cooperation to deal with the Covid-19 outbreak.
Prior to May, North Korea had not acknowledged any coronavirus cases — though few believe that a country of about 25 million people could have been spared by the virus for more than two years.
Since acknowledging its first infections, North Korea has reported more than 4.7 million “fever cases,” but claims the vast majority have fully recovered.
It is difficult to independently verify the case numbers and recoveries North Korean state media is reporting due to a lack of free media in the country.
The outbreak raised alarm internationally, given North Korea’s dilapidated public health infrastructure, lack of testing equipment and largely unvaccinated population.
Facebook
Twitter
Pinterest
LinkedIn