Supporters of Argentina from all over the world cheered the Argentinian side on to victory over the Dutch.

Lusail, Qatar – They came to Qatar from far and wide.

They came to Lusail Stadium clad in the white and sky blue of Argentina’s national colours.

But those making the journey to Lusail on Friday – located about 20km (more than 12 miles) north of central Doha – were not all from the South American country.

“Messi, he is mesmerising,” said Karan Agarwal, who travelled from Jaipur in India to watch Argentina play in Qatar’s World Cup.

“You can’t teach his skills even in the best football academies. You are born with it,” Agarwal told Al Jazeera.

Agarwal is just one of the many non-Argentinian fans of Argentina who have embraced the Albicelestes as their team of choice and travelled to Qatar to show their support for the South Americans.

Agarwal said, growing up in India, he became an Argentina fan because of the legendary Diego Maradona, and he sees echoes of Maradona in the current team’s star player and captain Lionel Messi.

“Every time I see Messi he reminds me of Maradona. Anyone who loves football loves Messi,” he said, his voice husky after much cheering during Argentina’s hard-fought penalty win over the Oranje of the Netherlands.

“Who else could do that other than Messi?” Agarwal said referring to the pass that led to the first Argentina goal against the Dutch on Friday.

“I will travel anywhere to witness such magic.”

The mood inside the 88,000-capacity Lusail Stadium was electric on Friday night thanks to the Albicelestes fans. Everywhere you looked, there were banners adorned with images of Messi and Maradona.

The Dutch fans were not only outnumbered, they were also out-cheered by Argentina’s supporters, who had travelled from across the world to see Messi lead his team to victory.

Messi, a seven-time Ballon d’or winner, said this would be his last World Cup. The little magician, as he is known, has been in top form on the pitch during this tournament and now has three goals to his name.

As the Dutch sat deep in defence in their match on Friday night, it was Messi’s run and exquisite pass that unlocked and outdid their defenders.

Each time Messi got the ball near the Oranje goal, it felt as if the entire stadium was on its feet cheering wildly and expecting to witness Messi’s magic.

Argentina are favourites to lift the World Cup trophy and their fans know it. They have come in huge numbers, not just expecting to win but to be entertained too. 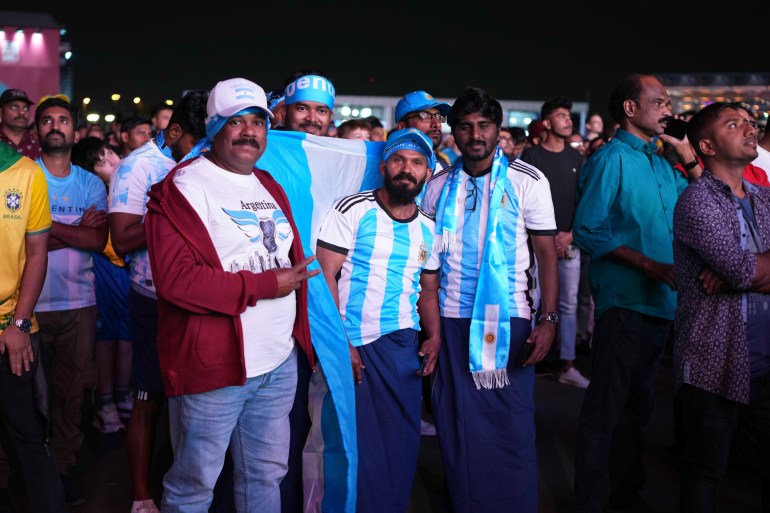 But the team suffered a huge shock when they were beaten in their opening game by Saudi Arabia and there were worries Messi might head home early. But it was Messi’s magic that unlocked Mexico in their second game where Argentina won 2-0 in what was a very nervy match.

Ali Khajah, an electrical engineer from Kuwait, could not believe he finally had a chance to watch Argentina and Messi.

“This is my second Argentina game I’m watching in this World Cup. It’s an honour to see him and Argentina in the flesh,” he told Al Jazeera.

Khajah was not sure if Argentina would come out on top on Friday night. After all, they were facing a Dutch side that had been unbeaten in their last 20 World Cup matches against non-European opponents – winning 14 matches and drawing in six. You would have to travel way back to 1994 for the last defeat – a quarter-final loss to Brazil.

“Holland are very strong. So, I was not sure,” Khajah said.

“But I’m glad I came to watch because I saw the magician do amazing. I like him and Ronaldo. They are [in a] different class,” he said.

‘With Messi in your team, anything is possible’

Savouring every moment of the win, many of the non-Argentinian Argentina fans were slow to exit the stadium long after the final whistle was blown.

“Amazing game. I will never forget. We played really well and Messi was great,” said Hani Albashir, who travelled from Saudi Arabia to watch his favourite team.

More than 30 minutes after the game had finished, Albashir was still in the stands taking selfies to remember the moment.

“I support Argentina because of the way they play the game. Beautiful, and they make it look simple and very natural. They play sexy football,” he added with a laugh.

He still could not believe he had just witnessed Argentina beat the Netherlands.

Before Friday’s match, Messi had nine World Cup goals for the Albicelestes – one behind Gabriel Batistuta, who is considered one of Argentina’s greatest strikers. In the 73rd minute of the game against the Netherlands, the little magician converted a penalty to equal Batistuta’s record.

“I came to witness history. And Messi made history tonight,” said Jasim Jamal, an IT technician from Kerala, India, clad in a Messi football jersey at Lusail Stadium.

“It’s a night I will never forget. Argentina don’t just play football. They entertain you,” said Jamal, adding there was “no team like Argentina”.

“Argentina play football the way it should be played no matter the opponent. It is why I will always support them,” he said.

Now Jamal said he would do anything to get his hands on a ticket for the semi-final.

“This opportunity doesn’t come around often,” he said.

Argentina now face Croatia who had earlier on Friday eliminated Brazil to book their place in the semi-finals.

But Argentina’s fans in Lusail think it is their time.

“With Messi in your team, anything is possible,” said Albashir, the supporter from Saudi Arabia.

“I have every faith we will win this World Cup.”