Steve Smith made a high-class 94 as Australia beat England by 72 runs in the second one-day international to secure a series win with a game to spare.

The former captain shared stands of 101 and 90 with Marnus Labuschagne and Mitchell Marsh, who each made half-centuries, as the hosts posted 280-8 in Sydney.

That looked a very long way off for England when Starc removed Jason Roy and Dawid Malan in the first over of the chase to leave them 0-2.

It got worse for the tourists, who chose to rest captain Jos Buttler, when Josh Hazlewood – skippering Australia for the first time with Pat Cummins also rested – bowled Phil Salt.

A 122-run partnership between James Vince and Sam Billings brought England back into contention before four wickets in three overs, including three for just one run, put the home side firmly in control.

Starc ended with figures of 4-47 and Adam Zampa took 4-45 as England were eventually bowled out for 208 in 38.4 overs and Australia take an unassailable 2-0 lead into Tuesday’s third and final ODI at the Melbourne Cricket Ground.

Smith in ominous form with Ashes on the horizon 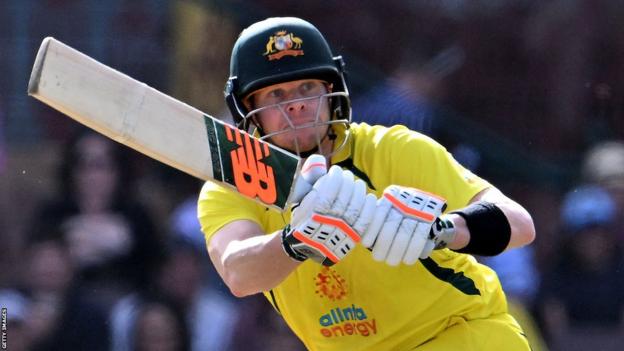 “Probably the best I’ve felt in about six years,” Smith told reporters after making 80 not out in the first ODI.

“I was just in really nice positions and I felt really good, I honestly haven’t felt that way in six years or so.”

With the Ashes now just a little over six months away, it feels somewhat inevitable that the former Australia skipper has found form again following – by his own standards – a quiet couple of years.

The slump – merely averaging over 50 in Test and ODI cricket over the last two years – led to Smith making significant changes to his technique that mean he is more side-on at the crease.

After such a fluent knock in Adelaide, it was more of a struggle for 33-year-old on a slow pitch at the SCG but he was still in control for the vast majority of his innings.

Even during the spells when the runs weren’t flowing, Smith never looked like getting out.

When he did free his arms, though, the new method seemed to allow him to access the off side more easily without noticeably diminishing his great strength through the leg side.

It was only when he tried to reach his century with a flourish that he came unstuck, but only after putting Australia into a strong position.

How Smith’s revised approach translates to red-ball cricket remains to be seen but on the evidence so far, there is every reason for bowlers around the world to start getting a little nervous.

Vince and Billings impress in losing cause

For a player on the fringes of the squad, hoping to push for more regular inclusion, coming in to face the left-arm quick with his tail up would not be considered ideal.

That is the challenge that faced Vince, though, and things were only marginally simpler for Billings when he strode out with England 34-3.

Still, with competition for places as ferocious as ever ahead of next year’s 50-over World Cup in India, what better chance to stake your claim than on a tricky pitch, against a world-class attack with your back against the wall in a run chase?

Both Vince and Billings showed the necessary grit to get through the new ball and the former was the first to go on the offensive as he skipped down and hit Ashton Agar for a glorious six over extra cover.

At the other end, Billings’ temperament was admirable as he held his nerve despite a strike-rate hovering around 50 after facing more than 40 balls.

Back-to-back sixes off Agar got him going and he had raced past Vince by the time the partnership was broken, frustration eventually getting the better of the Hampshire man after a quieter period as he tried to hoick Hazlewood over the leg side.

Billings, too, has reason to be irritated by the manner and timing of his dismissal. The Kent man yorked himself as he advanced to Zampa at a stage of the chase when England, having just lost Vince and Moeen Ali, needed him to hold the innings together.

That they weren’t able to take the game that bit deeper will be the disappointment for both players but their contributions keep them firmly in the picture for a World Cup place.

With Buttler, Joe Root, Liam Livingstone and, if he can be persuaded, possibly even Ben Stokes to come back into the XI, the runs need to keep coming if they want a place on the plane to India.

England batter James Vince on BBC Test Match Special: “At the halfway stage it didn’t look the easiest of wickets but we felt in the game with 280.

“But conditions didn’t quite suit attacking in the way we normally would so it was probably par, just over. We lost early wickets and the flurry of wickets after me and Sam got out really hurt us.”

Australia batter Steve Smith on TMS: “It’s obviously nice to get the series win, we know England are a quality side. They’re missing a couple of players but it’s always nice to win.

“It was a tough wicket today, it felt like old-school ODI cricket so we had to build partnerships and make sure we take it deep because it wasn’t easy for the new batter coming in.”

Former Australia bowler Stuart Clark on TMS: “It was ruthless from Australia. They were too good for England this time round and played some really good cricket.

“Smith and Labuschagne batted brilliantly and then when you lose two wickets in the first over, you’re not coming back from that very often.”