Messi left La Bajada when he was 13, but he still lives there – in murals and the memories of residents.

Rosario, Argentina – Seventy-year-old Susana Araus can remember what her neighbourhood looked like in simpler times: Card games with friends, a cloud of squealing children running through the streets, heading to the pool, or battling for a football.

In the thick of it all, finding the gaps that mattered, was a diminutive boy who placed this tiny pocket of Argentina on the global map.

“He was like any other child,” said Araus of Lionel Messi, among the world’s greatest players.

This was Messi’s childhood haunt, a neighbourhood known as La Bajada (“the slope down”), in the mid-sized city of Rosario.

“He was always very humble,” said Barbara Sossi, 33, who was among the youngsters that played football with Messi. “Just like now. The way you see him, he’s been like that his whole life.”

Messi played for six years for the youth side of Newell’s Old Boys, one of Rosario’s main local clubs, scoring nearly 500 goals. His talent took his family from Argentina to Spain, where he received treatment for a growth hormone deficiency and launched a 21-year-long career with Barcelona.

The Catalan club is where Messi became a global superstar. Barcelona won a record 35 trophies, including 10 La Liga, seven Copa del Rey and four UEFA Champions League with the Argentine in the side.

He is the most decorated Ballon d’Or winner, having been awarded football’s top prize seven times. Last year, he brought home the Copa America title as captain of Argentina. He’s now lacing up for his fifth and likely final World Cup – the coveted prize that has so far eluded him.

The 13 years in La Bajada left a mark on Messi and on the streets that helped hone and nurture his talent. In many ways, he is still there, in towering murals and the memories of residents.

His former primary school teacher is still at the chalkboard, and his high school grades are preserved on the pages of a blue record book, where the grades of all students are recorded.

Parents, who are now grandparents, remember walking him and their children to the pitch. His friends are now grownups and walk their own children past utility poles that are painted to look like his jersey in blue and white paint and with the number 10.

“When they grew up, all of this disappeared,” said Araus, standing in the afternoon sun outside the door of her neighbour Olga Dawydowycz. “Because there wasn’t another generation here that played with the ball.”

Messi’s neighbourhood is full of people like Araus and Dawydowycz.

Dawydowycz, now 75, has lived here for 50 years. In the early 1970s, she and her husband moved to the United States for three years, where she worked in a purse factory in New Jersey in order to save money for her house in La Bajada.

She and Araus reminisced about Messi and the families they both raised. They recalled Messi’s grandmother, Celia, who lived down the street and who pushed and prodded coaches to put him in the game at a young age.

She died when Messi was 10, and he talks often about how when he points to the sky to celebrate a goal, he is thanking her.

“A very good kid” is how Dawydowycz described him.

Down the street, Sebastian Murua concurred. “I used to tell Jorge [Messi’s father], you have gold,” said Murua, 66, who still works as a baker because his pension is not enough to pay the bills.

He and his wife raised four boys in La Bajada. One of them started a small football club on the street that pays homage to Messi by including “La Pelota Siempre Al 10” or “Always (pass) the ball to Number 10” as its motto. 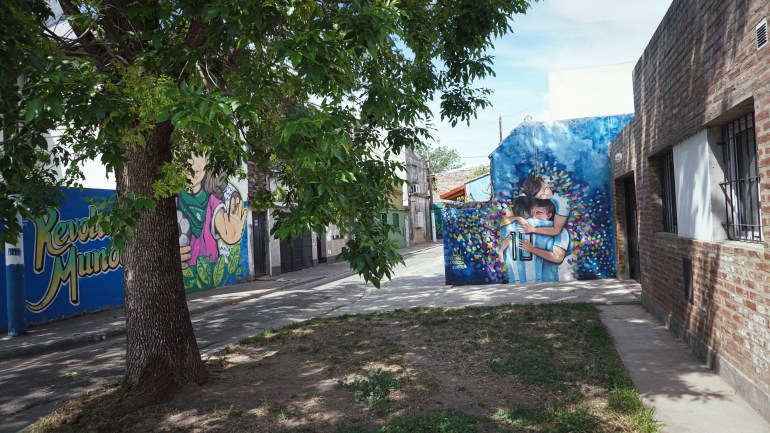 “When you see a strange car around here, something that looks like a spaceship, behind those tinted windows is Leo or someone from his family,” said Murua with a laugh.

“I congratulate them. That they have grown as a family. When I’ve seen them in the grocery store, they say hi, as if we had spent our whole lives together.” Members of the family still live in the area.

In the last decade, violence in Rosario has skyrocketed due to a drug war. The homicide rate is four times the national average. While La Bajada is described by the older generation as a peaceful enclave, there is a prevailing sense of insecurity.

“I don’t let my daughter go out after 7pm. I just started being ok with her coming home from school alone, and it’s three blocks away,” said Sossi, who kicked the ball with Messi as a child, as she and her 13-year-old daughter walked their dogs in an abandoned field by La Bajada.

She pointed to a municipal building on the other side of the street. The other day, someone on a bicycle fired shots outside it, she said. It was at night and no one was hurt.

“I tell my kids, if you hear shots, go on the ground. Even if it’s just fireworks,” she said. “All the neighbourhoods have changed.”

Yet, some things have stayed the same.

At Messi’s high school, the large blue record book that lists his grades from the first year is still sitting on a shelf in the school’s office. A secretary pulls it out, and runs her fingers over the lined pages with his name written on top.

Messi left for Barcelona before his first year was up.

“He never forgot where he came from,” said Cintia Vega, 40, who works in the school’s administration, her voice filled with pride. “He never lost his Argentine accent. He loves his country and city. He speaks like a Rosarino.”

Messi’s elementary school, Escuela No 66 General Las Heras, is around the corner. Its ties to Messi are stronger because he completed his entire primary education there. He visited the school in 2005 when he was 18, and over the years has made a range of donations, from computers to pitching in for school trips to another province.

“At the time, he didn’t want any of that to be made public,” said Andrea Sosa, who taught Messi in the fifth and sixth grades. There’s now a Messi mural painted on one of the exterior school walls by Brazilian artist Paulo Consentino. Sosa says it’s still hard to believe that the little boy who walked those halls achieved all that he has.

Winning the Copa America with Argentina last year must have lifted a great weight off his shoulders, she said, given the intense expectations that Argentines had of him to bring home an international trophy.

She thinks about the pressure he is still under, to bring a World Cup trophy home before he says goodbye to the tournament.

Sosa, 55, is also retiring, from a 35-year career shaping young minds. She had a simple wish for her former student, as he too nears a new phase of his life.

“I hope he enjoys everything he has harvested.”

Shiffrin nears Stenmark’s record but says his legacy is safe

LeBron James returns to Los Angeles with history in his grasp