(CNN) Nick Kyrgios thought his first-round match was one of the worst he’s ever played at Wimbledon; his performance against Filip Krajinovic two days later, however, may have been his best.

The Australian produced a serving masterclass as he swept aside Krajinovic, a beaten finalist at Queen’s Club two weeks ago, in just an hour and 25 minutes on Thursday, rocketing 24 aces over the course of a 6-2 6-3 6-1 victory.
It was a statement performance — and Kyrgios knew it.
“I just wanted to prove to people that I’m really good,” he told reporters, “and I feel like I just don’t have the respect sometimes.”
Kyrgios has long proved a divisive figure in tennis — on the one hand, one of the game’s great entertainers and talents; on the other, a player who garners criticism for his on-court behavior and outbursts towards umpires.
But against Krajinovic, he let his tennis do the talking, and at times, he appeared entirely unplayable.
It wasn’t until the start of the second set that the Serbian took a point off Krygios’ serve — something he only managed to do nine times throughout the match. 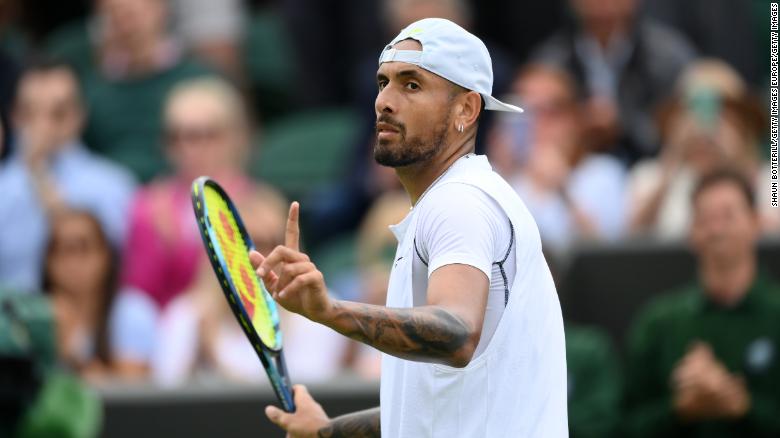 Kyrgios celebrates winning match point against Krajinovic in less than 90 minutes.
The on-court speed gun stopped working at one point, but it later flashed back into life in time to clock a Kyrgios serve at 135 miles per hour — eight mph short of his tournament record from 2019.
Mixed in with his masterful serving were some deft touches — notably, a perfectly weighted lob that delivered his first break of the third set, sparking chants of “Aussie, Aussie, Aussie” from his golden-clad fans — and clean, accurate ball striking from the baseline.
“I really wanted to go out there today and remind everyone that I’m able to play some really good tennis without any distractions,” Kyrgios said. “The crowd enjoyed it today and it was just business-like.”
The 27-year-old hasn’t always endeared himself to the Wimbledon crowd. He admitted after his first-round match against Britain’s Paul Jubb that he spat towards a fan he felt was “disrespecting” him.
When asked about that incident after Thursday’s game, Kyrgios was bullish. “I played Filip Krajinovic today. Do you not want to know how I played?” he shot back.
Kyrgios pitted himself against the media on several occasions during the post-match press conference.
“There was just nothing the media could possibly tell me I did wrong today,” he said as he reflected on his performance.
“I just know that you can’t possibly ask me anything and stir anything up. I love it because you can’t write anything. What are you going to say? Nothing today. I’ve dumbfounded all of you.”
Indeed, some of his shots against Krajinovic were breathtakingly good. He racked up 50 winners during the match, including a jabbed backhand return to seal the victory.
That set up a hugely exciting third-round clash against Stefanos Tsitsipas after the fourth seed’s straight-sets victory against Jordan Thompson. 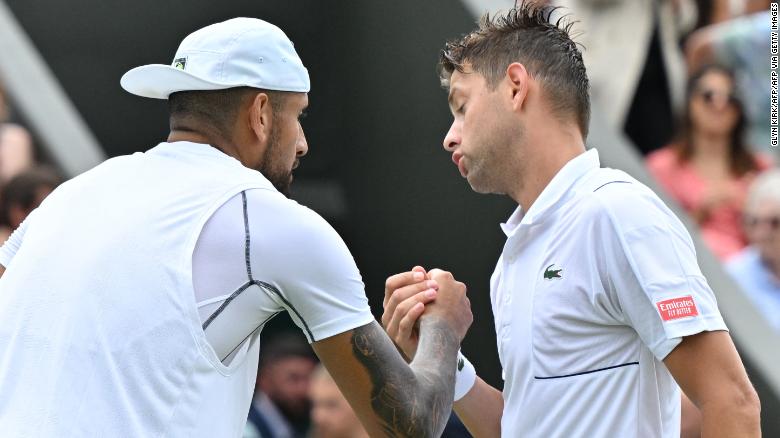 Kyrgios (left) and Krajinovic (right) shake hands after their second-round match at Wimbledon.
A deep run at Wimbledon feels overdue for Kyrgios. His best result here remains a quarterfinal appearance in 2014 when he made his tournament debut aged 19, in the process beating then-world-No. 1 Rafael Nadal.
On Thursday, Kyrgios withdrew from the men’s doubles event in order to give himself ample opportunity to recover — “I’m a singles player, my priority has always been singles,” he explained — and said in his on-court interview that this year’s Wimbledon has been “circled on my calendar pretty much all year.”
“It’s generally a tournament where I think it’s my best chance to win a grand slam out of all the four,” Kyrgios added.
The world No. 40 is rarely afraid to speak candidly, and this year has been no exception. In May, Kyrgios opened up about the mental health issues he has dealt with throughout his tennis career, recounting his struggles with drug and alcohol abuse, as well as self-harm.
He told Wide World of Sports that he felt “worthless” at one stage in his life and had been deeply affected by abuse on social media. He added, however, that the Covid-19 pandemic has helped him to get on top of his mental health, and at Wimbledon, Kyrgios said he’s embracing a more positive frame of mind.
“I just feel like I’m comfortable in my own skin. Some people love to just tear me down, but it’s just not possible anymore,” he said.
Play like he did on Thursday, and it will be impossible for anyone to tear Kyrgios down on the court, too, such was his supremacy against Krajinovic.
“I’m extremely confident in myself, all the challenges I’ve overcome in my life,” he said.
“I’m proud to be up here and doing it my own way. Being able to produce tennis like that at Wimbledon, it’s a dream come true for any tennis player.”
Facebook
Twitter
Pinterest
LinkedIn

Qatar World Cup could start a day earlier than scheduled

India denies it will provide homes to Rohingya in capital