Special to the Express: The most notable of the new sanctions includes measures against the state-run oil and gas company. The enterprise is considered to be one of the junta’s largest sources of profit.

The European Union imposed its fourth round of sanctions on Myanmar’s military junta on Monday afternoon, months after the US and Britain strengthened their punitive measures against the country’s armed forces that overthrew a democratically-elected government more than a year ago.

An additional 22 officials and four military-aligned companies were added to the EU’s sanctions list in response to the “continuing grave situation and intensifying human rights violations” in Myanmar, the European Council said in a statement.

The newly-sanctioned persons include Aung Naing Oo, the junta-appointed Minister of Investment and Foreign Economic Relations, as well as the ministers of industry, information, social welfare, relief and resettlement.

Several officials from the Union Election Commission were also sanctioned for their roles in annulling the results of the November 2020 elections, which were won easily by the now-ousted National League for Democracy (NLD).

Most importantly, the EU became the first to impose sanctions on the state-run Myanma Oil and Gas Enterprise (MOGE), one of the junta’s largest cash-cows.

Kristina Kironska, a Bratislava-based academic who specializes in Myanmar, told DW that Burmese activists and international campaigners have long called for sanctions on Myanmar’s profitable oil and gas sector.

It accounts for approximately half of the foreign currency revenue for the junta, which took over the state’s banks and savings after its coup in February 2021, she said. The junta expects MOGE to earn in excess of $1 billion (€882 million) from oil and gas projects in the 2021-2022 financial year.

The sanctioning of MOGE is a “historic win for grassroots activism throughout Myanmar and around the world, after over a year of campaigning to stop oil and gas revenue flowing to the terrorist military junta,” said Yadanar Maung, a spokesperson for Justice For Myanmar, a research activist group.

She said these sanctions are “essential to deny the junta the funds it needs to finance its increasing and intensifying violent attacks against civilians, which amount to war crimes and crimes against humanity.”

More than 1,500 civilians have been killed by security forces since last year’s coup, according to the Assistance Association for Political Prisoners, which monitors military abuses.

Last September, the National Unity Government, the shadow government, called for a popular uprising against the junta. Parts of the country are controlled by civilian militias, the People’s Defense Forces, and ethnic-minority armies.

Calls for ‘immediate cessation’ of hostilities

“As a matter of priority, the EU reiterates its calls for an immediate cessation of all hostilities, and an end to the disproportionate use of force and the state of emergency,” the European Council said in a statement.

“The European Union will continue to provide humanitarian assistance, in accordance with the principles of humanity, neutrality, impartiality and independence,” it added. “The EU reiterates its call for the full and immediate respect of international humanitarian law.”

Mark Farmaner, the director of Burma Campaign UK, a London-based NGO, told DW that “one of the biggest impacts of these EU sanctions may be that they embarrass the US into finally taking action on gas revenue to the military.”

Some analysts believe the EU’s decision to sanction MOGE came after the French-owned gas giant, TotalEnergies, announced last month that it was ceasing operations in Myanmar. It had operated the Yadana gas field production in partnership with MOGE and the Thai-owned PTT, the main purchaser of the exported gas, for several decades.

US firm Chevron, a minority partner in the project that supplies around half of the country’s gas, also announced its exit from Myanmar around the same time. Meanwhile, Japanese trading house Mitsubishi said last week that it plans to sell its stake in a natural gas field in Myanmar. 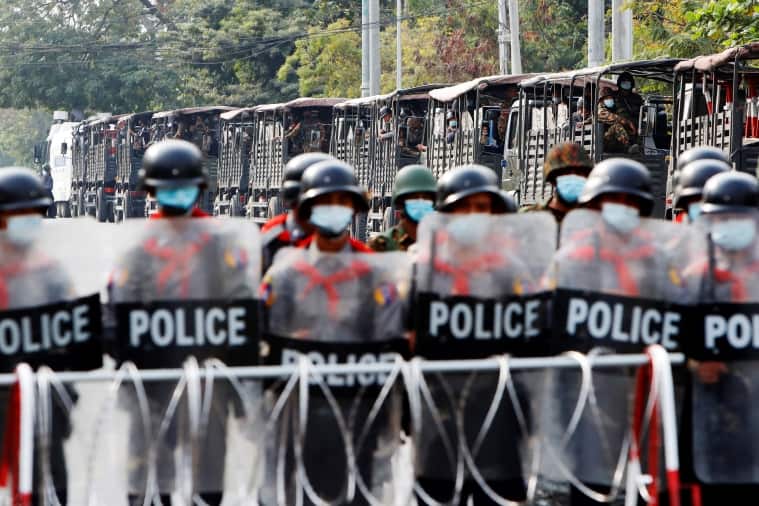 Last month, TotalEnergies initiated the contractual process of withdrawing from Myanmar over the deteriorating human rights situation. The process “will be effective at the latest at the expiry of the 6-month contractual period” and will be done “without any financial compensation,” according to a company statement issued on January 21.

“During this notice period,” it stated, “TotalEnergies will continue to act as a responsible operator in order to ensure the continuity of gas deliveries for the benefit of the population.”

“In the event of withdrawal, TotalEnergies’ interests will be shared between the current partners, unless they object to such allocation, and the role of operator will be taken over by one of the partners,” it added.

At least one dead, several injured in machete attack at southern Spain churches