Female demonstrators carrying a banner that read ‘August 15 is a black day’ demand rights to work and political participation.

Taliban fighters beat female protesters and fired into the air on Saturday to dispersed a rare rally in the Afghan capital, Kabul, days before the first anniversary of the group’s return to power.

About 40 women marched on the education ministry in Kabul, chanting “bread, work and freedom”. Despite the pledges made when it retook power, the Taliban has limited Afghan women’s rights, including keeping high school girl students out of school.

Some protesters who took refuge in nearby shops were chased and beaten by Taliban fighters with their rifle butts, according to the AFP news agency.

The demonstrators carried a banner, which read “August 15 is a black day” as they demanded rights to work and political participation.

“Justice, justice. We’re fed up with ignorance,” they chanted, many not wearing face veils.

“Unfortunately, the Taliban from the intelligence service came and fired in the air,” said Zholia Parsi, one of the organisers of the march.

“They dispersed the girls, tore our banners and confiscated the mobile phones of many girls.”

“If the Taliban want to silence this voice, it’s not possible. We will protest from our homes,” she said.

Some journalists covering the demonstration – the first women’s rally in months – were also beaten by the Taliban fighters, an AFP correspondent saw.

While the Taliban authorities have allowed and even promoted some rallies against the United States, they have declined permission for any women’s rally since they returned to power.

After seizing control last year, the Taliban has gone back on its promises of women’s rights and media freedom, bringing back memories of its harsh rule from 1996 to 2001.

Tens of thousands of girls have been shut out of secondary schools, while women have been barred from returning to many government jobs. 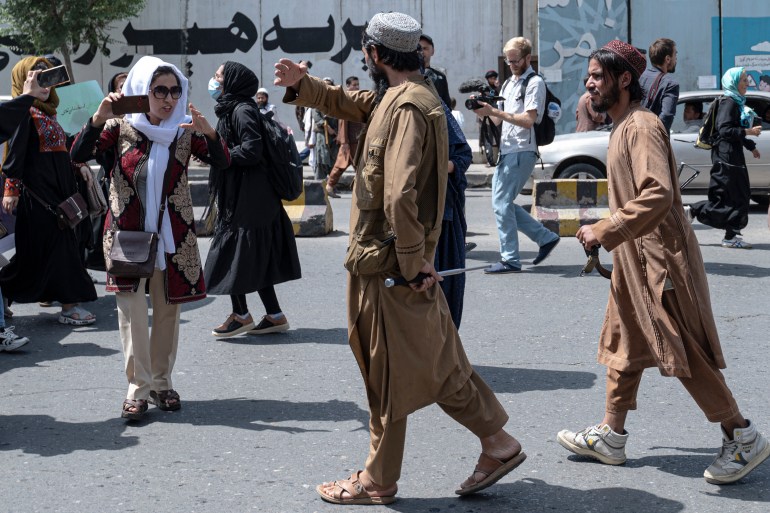 Women have also been banned from travelling alone on long trips and can only visit public gardens and parks in the capital on designated days, when men are not allowed.

In May, the country’s supreme leader and chief of the Taliban, Haibatullah Akhunzada, ordered women to fully cover themselves in public, including their faces – ideally with an all-encompassing burqa.

The United Nations and rights groups have repeatedly slammed the Taliban government for imposing the restrictions on women.

These policies show a “pattern of absolute gender segregation and are aimed at making women invisible in the society”, Richard Bennett, UN special rapporteur on human rights in Afghanistan, told reporters in Kabul during a visit in May.

Human Rights Watch on Thursday called on the Taliban to “reverse their horrifying and misogynistic” decision to bar women from education.

“This would send a message that the Taliban are willing to reconsider their most egregious actions,” Fereshta Abbasi, Afghanistan researcher at the rights group, said in a statement.

Some Afghan women initially pushed back against the curbs, holding small protests.

But the Taliban soon rounded up the protest organisers, holding them incommunicado while denying they had been detained.

A study by the International Labor Organization (ILO) this year documented a disproportionate drop in women’s employment in Afghanistan – 16 percent in the months immediately following the Taliban takeover. In contrast, male employment dropped by 6 percent.

Prior to the Taliban takeover, women made up 22 percent of the Afghan workforce. While the figure was still dismal, it reflected years of social progress in a deeply patriarchal and conservative society like Afghanistan.

Working women in Afghanistan are also vulnerable to unemployment shocks due to the existing economic crisis, restrictions on women’s movement by the Taliban, and the prevalent patriarchy.

While the Afghan economy has severely suffered due to the Western sanctions on the Taliban, women-centric businesses were among the worst affected due to the additional restrictions on women.

A recent World Bank survey noted that 42 percent of women-owned businesses in Afghanistan had temporarily closed compared with the closure of 26 percent of the firms owned by men.

Additionally, about 83 percent of the businesswomen indicated that they were expecting revenue losses over the next six months, forcing them to engage in coping mechanisms such as downsizing their staff, often comprising largely of women.

Numerous media outlets have ceased their work and hundreds of journalists have lost their jobs in the last one year, according to Reporters Without Borders (RSF).

“Journalism in Afghanistan is bleeding to death,” RSF director Christian Mihr said in a statement on Friday.

“The Taliban have enacted numerous laws that restrict freedom of the press and encourage the persecution and intimidation of media and journalists,” she added.

According to RSF, a good third of 550 media outlets that had been active as of August 15, 2021 – the day the Taliban took over control again after more than 20 years – have been shut down.