Donald Trump says the the public release of his tax returns is ‘going to lead to horrible things for so many people’.

A Democratic-controlled United States House of Representatives committee released six years of former President Donald Trump’s tax returns to the public on Friday in an extraordinary move just days before Republicans are due to take control of the chamber.

Release of Trump’s redacted returns for 2015 through 2020 caps a nearly four-year battle between the former Republican president and Democratic lawmakers that was settled only last month by the US Supreme Court.

It is the latest blow for Trump, 76, who was impeached twice by the Democratic-led House only to be acquitted both times by the Senate, and now faces multiple legal woes as he mounts a 2024 reelection bid.

Earlier this month, the House committee investigating the January 6, 2021, attack on the US Capitol by Trump’s supporters asked federal prosecutors to charge him with four crimes, including obstruction and insurrection, for his role in the deadly riot.

“The Democrats should have never done it, the Supreme Court should have never approved it, and it’s going to lead to horrible things for so many people,” Trump said of the release in a statement Friday. “The radical, left Democrats have weaponized everything, but remember, that is a dangerous two-way street!”

He said the returns “once again show how proudly successful I have been and how I have been able to use depreciation and various other tax deductions as an incentive for creating thousands of jobs and magnificent structures and enterprises”.

House Ways and Means Committee Chairman Richard Neal had requested the returns in 2019, arguing that Congress needed them to determine if legislation on presidential tax returns was warranted.

Republicans said the move could lead to the political weaponisation of individual tax returns and warned that party members who take over the panel next month would face pressure to pursue a similar path against high-profile Democrats.

Trump, who took office in 2017, was the first presidential candidate in decades not to release his taxes. He had waged a legal battle to keep them secret while he was in the White House. But the Supreme Court ruled last month that he had to turn them over to the tax-writing Ways and Means Committee.

In a report last week, the committee outlined its findings from its examination of the documents, saying the Internal Revenue Service (IRS) broke its own rules by not auditing Trump for three out of four years while he was president.

The IRS only began to audit Trump’s 2016 tax filings on April 3, 2019 – more than two years into his presidency – when the committee chairman, Representative Richard Neal, a Massachusetts Democrat, asked the agency for information related to the tax returns.

By comparison, there were audits of President Joe Biden for the 2020 and 2021 tax years, said Andrew Bates, a White House spokesperson. A spokesperson for former President Barack Obama said Obama was audited in each of his eight years in office. 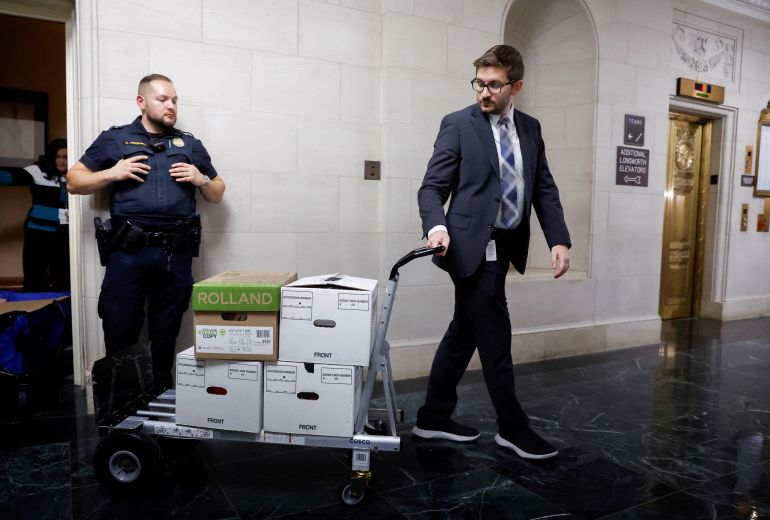 A report from Congress’ nonpartisan Joint Committee on Taxation raised multiple red flags about aspects of Trump’s tax filings, including his carryover losses, deductions tied to conservation and charitable donations, and loans to his children that could be taxable gifts.

Details previously released by the panel showed Trump paid no income tax in 2020, his final full year in office, despite millions of dollars in earnings from his sprawling business empire.

The records show Trump’s income and tax liability fluctuated dramatically from 2015 through 2020, during his first presidential bid and subsequent term in office. They show Trump and his wife Melania Trump claimed large deductions and losses and paid little or no income tax in several of those years.

The returns are likely to offer the clearest picture yet Trump’s finances during his time in office.

“During his first few years in the presidency, his income appeared to stabilize. But then in 2020, he reported a loss of some $4 million, which resulted in him paying zero tax in 2020,” said Al Jazeera’s Mike Hanna, reporting from Washington DC.

“Now another thing about this is that Donald Trump himself claimed that he would not release his tax records because he was under audit. These records indicate that that was a blatant lie.”

Trump, known for building skyscrapers and hosting a reality TV show before winning the White House, did give some limited details about his holdings and income on mandatory disclosure forms. He has promoted his wealth in the annual financial statements he provides to banks to secure loans and to financial magazines to secure his place in the rankings of the world’s billionaires.

Trump’s longtime accounting firm has since disavowed the statements, and New York Attorney General Letitia James has filed a lawsuit alleging Trump and his Trump Organization inflated asset values on the statements as part of a yearslong fraud. Trump and his company have denied any wrongdoing.

The Trump Organization was convicted earlier this month on separate tax fraud charges for helping some executives dodge taxes on company-paid perks, such as apartments and luxury cars.

Democrats were on a tight timeline to find a way to handle the returns once they obtained them, given that Republicans will take control of the House on Tuesday after winning a slim majority in November’s midterm elections.

The Democratic-controlled House passed a bill before it left on its winter recess that would mandate that the tax-collecting IRS complete audits of presidents’ tax filings within 90 days of their inaugurations.

Nikki Haley, once Trump’s UN ambassador, to take him on in 2024